District of Bizarro--The Price of Pride 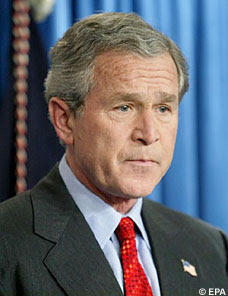 If the Charlatan looks befuddled, its because he is. He even looked a gift horse in the mouth. We now know the price of his pride thanks to a transcript of the meeting he had with the Spanish Prime Minister at his hobby farm in Crawford a month before the invasion. In the meeting he told the Prime Minister that Saddam had offered to go into exile in Egypt for $1 billion. He took the offer as genuine, but rejected it. He boasted that, "We'll be in Baghdad by the end of March". The war in Iraq is now approaching the same cost as Vietnam. It has already cost more than the Korean War. His latest request to Congress for funding both wars in Afghanistan and Iraq is $150 billion more. 3800 Americans and hundreds of thousands of Iraqis are dead. Too bad for our country he did not have the horse sense his daddy had when presented with the opportunity to take the road to Baghdad.
Posted by US PERSON at 9:09 AM

or the scary Holocaust denier:

District of Bizarro: The Latest Lie

Al Gore sent this item out to his on line community: Last Friday, Martin McGuiness, special assistant to the president for legislative affairs made the incredible claim that the current regime, "has done more for the environment and addressing energy security and climate change than any other in history." The extent of their self deception is truly staggering! The Charlatan came into office and rejected the historic Kyoto Accord that called for only a 7% reduction in CO2 emissions below 1990 levels. He claimed, with no basis in fact, that the treaty was bad for business. His underlings have worked feverishly to undermine any progress on the crisis at the G8 and APEC conferences this summer. Government scientists were restrained from speaking about climate change in public and their reports edited by a former energy lobbyist. Some more examples of the regime "doing more":

Only someone with no familiarity with the environmental record of the current regime, like the President, could willfully suspend disbelief and swallow this canard.

Le Shorter: Even the Doctors Agree

The authors of the Dartmouth Atlas of Health Care conclude that, "the 'system' of health care in the United States is not a system at all, but a largely unplanned and irrational sprawl of resources, undisciplined by the laws of supply and demand." Delivery of a service, that is increasingly motivated by concerns such as potential professional liability, corporate profits, and loss prevention, but not for the recipient's benefit should to be scrapped and redesigned rationally.
Posted by US PERSON at 11:58 AM

To The Bitter End

It is instructive to recall just how intractable, unrelenting, and unreformed the exploitation industries can be when they are called upon to take legal responsibility for the havoc they reek on the environment. The NRDC has been fighting Texaco for nineteen years in federal court over the illegal dumping of toxic hydrocarbon waste from it's refinery into the Delaware River. The environmental advocacy group is now headed into its fourth trial against the oil giant. After three courtroom victories by NRDC, Texaco was fined $1.68 million for violating the Clean Water Act on 3,360 days. The company eventually paid the fine under pressure. It was also ordered to fully assess the damage the pollution caused to the Delaware River ecosystem. A multivolume damage report was finally completed last year which concluded that the ecosystem was harmed, but that the toxic aromatic hydrocarbons did not come from it's refinery. NRDC's science expert thinks the chemicals are directly traceable to Texaco's refinery, and that Texaco may have manipulated the data to absolve itself of responsibility. The court has directed it's own independent expert to determine whether Texaco "cooked the books". According to NRDC's litigation director, "Texaco has waged a war of attrition clearly hoping that [we] would run out of money and go away". If you want to help NRDC fight the good fight, go to their website and become a supporting member like me. The contribution is tax deductible.
Posted by US PERSON at 10:00 AM

District of Bizarro: Kill the Messenger

The Senate, in another new low of spineless, cheap, and mendacious political grand standing, passed a Republican amendment criticizing the MoveOn.org grassroots organization for a pun on General Petraeus' name. An ad the group ran rhymed his name with "Betray Us". Obviously, the Senators took the expedient way out by criticizing citizens exercising their right of free speech rather than taking the politically risky road of ending the mayhem and death in Iraq. General Petraeus deserves to be criticized for his congressional testimony devoid of professional candor, and delivered solely to justify extending the occupation until the end of the current domestic Regime. Americans know that the so-called "mission" in Iraq has failed, and that the Pentagon is incapable and ill equipped to put that country back together. They also fear that in the past seven years of the domestic Regime, their own civil liberties are being eroded and curtailed. Protesters wearing message T shirts are arrested at rallies, boisterous questioners of public officials are repeatedly tasered, and dissenters are corralled in pens out of the view of the public media. The censoring of MoveOn.org is another example of this disturbing trend toward Orwellian thought control. Not since the days of CONINTELPRO has the anti war wing of the Democratic Party been subjected to such chilling treatment by its own elected representatives. Shame.
Posted by US PERSON at 12:30 AM

No more rest for weary soldiers, no habeas corpus writs for prisoners of war, and no health insurance for America's children.

A free lunch for Hillary's lobbyist friends.
Posted by US PERSON at 9:17 AM

The Washington Post reports that the US has set up a "House of Wisdom" at Camp Victory for insurgent Iraqis who have been detained for more than a year. The indoctrination program is intended to "wage war on the battlefield of the mind" and according to the Marine general in charge, "bend them back to our will". The re-education is conducted by moderate Muslim clerics. The US has released about 2000 detainees who have passed psychological scrutiny, including polygraph tests, and are not considered to pose a threat to US troops. The number of detainees in Iraq has swelled from 10,000 last year to more than 25,000 now.
Posted by US PERSON at 9:37 AM

District of Bizarro: The Human Billboard

Now that the general in command of our occupation forces in Iraq has exhibited his many glinting medals under the camera lights and towed the party line, I want to draw your attention to the real, important development there. The regime and it's corporate media handmaidens have repeatedly touted that Anbar Province is more pacified. Of course they fail to mention that the gains in that largely Sunni region is offset by the planned withdrawal of British forces from Basra Province, a largely Shia region, leaving it dominated by waring militias. Basra has has most of the county's oil reserves.

The limited tactical improvement in Anbar is due to directly to the decision of sheiks to oppose the foreign jihadists making up Al Qaeda in Iraq, not the 'surge' in US troop levels. Their decision was facilitated by the US offering them guns and money. One of the leading sheiks who decided to oppose the jihadists was assassinated on Thursday of last week in a roadside bomb explosion. Abdul-Sattar Abu Risha had escaped a previous assassination attempt in February. The young sheik organised 25 clans in Anbar to oppose Al Qaeda with American assistance. The attack was probably carried out by Al Qaeda which has killed four of the sheik's brothers and six other relatives working for the US. Although the alliance has achieved some success in stabilizing Anbar, a survey conducted during August for the BBC and ABC News says 76 % of Anbar residents want the US to leave now. Every poll respondent said attacks on US forces were acceptable and only 23% expressed confidence in local leaders. Must be tough love.
Posted by US PERSON at 8:19 AM

Le Shorter: I told you so.

In his memoirs, former Federal Reserve Chairman and staunch Republican, Alan Greenspan, speaks the truth. He is "sad" that the Iraq invasion is largely about oil. No doubt the Americans who have given their limbs and the families of those who gave their lives in such a foolish foreign gambit are sad too. But what is even sadder is that our congressional leaders lack the fortitude to bring the American agony in Iraq to a speedy end by refusing to fund the war any longer. Congress' message to the troops: Die more.
Posted by US PERSON at 11:09 AM

U.S. Person will be away from his desk during the month of September. Check back later for more high impact blog at Persona Non Grata.
Posted by US PERSON at 2:23 AM