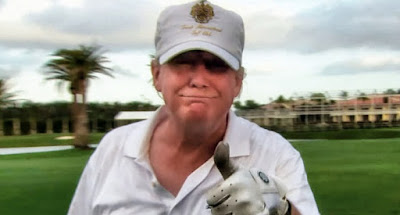 “A business man who was also a biologist and a sociologist would know, approximately,
the right thing to do for humanity. But, outside the realm of business, these men are stupid.
They know only business. They do not know mankind nor society,
and yet they set themselves up as arbiters of the fates of the hungry millions
and all the other millions thrown in."
--Jack London, Iron Heel
Trumpillini cannot even claim he is an ACE business person after the NY Times finally released two decades of his tax returns on Sunday.  The idiot has lost not one $400 million fortune that his daddy bestowed, but another $427 million he earned from his inane TV show, The Apprentice, where he conveniently honed his executive schtick.  Running for president was a grift, intended to bolster his flagging brand with conflicting business deals and free 24/7 media exposure, until he actually won a "rigged" contest.  After that, he was willing to shake down foreign leaders for more money.  Could it be Putin has some of his golf markers on file? (his courses have lost $$315.6 million since 2000). Trump made an absurdly large amount of money ($2.3 million) from handling the 2013 Miss Universe pageant in Moscow. The 'King of Debt' owes about $1.13 billion according to Forbes including a disputed 2010 tax refund of about $72.9 million*, and $421 million in guaranteed loans coming due by the end of a second term, if he gets one.  No wonder he does not want to leave the immunity of the Room Without Corners!
Fours years, an impeachment, and one pandemic later, he is now exposed for what he is: an emperor without clothes, an amoral white collar criminal, and a national security risk.  The man has even used his daughter, Ivanka, as a recurring tax dodge, avoiding gift taxes by deducting her six figure allowance as consulting fees.  In fifteen years the billionaire has paid a total of $1,500 in federal taxes, and for ten of those years he paid zero; many middle class taxpayers pay that much in one year.  As he once said, "only chumps pay taxes".  So what does that make the infantile idolizers who put him in power and enable his misbegotten rule?  Has 'daddy' finally arrived to take l'il Donny to the woodshed?  US Person can only hope. 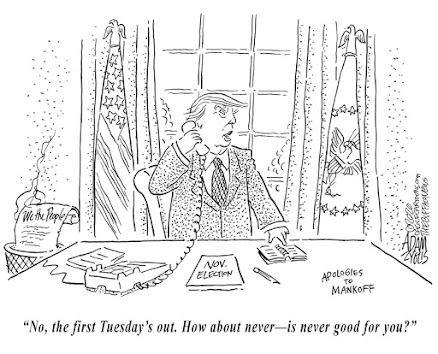 credit: A. Zygus, Buffalo News
“The orderly transfer of authority as called for in the Constitution routinely takes place as it has for almost
two centuries and few of us stop to think how unique we really are. In the eyes of many in the world,
this every 4-year ceremony we accept as normal is nothing less than a miracle."--Ronald Regan

*The tax refund must be reviewed by the Senate Joint Committee on Taxation where it has stalled since 2016. His accountants made use of a tax credit provision known as abandonment of a business. This claim is probably related to his decision to give up his money-losing casinos in Atlantic City. The credit is enormous, $700 million in losses, but to qualify Trump cannot have any thing of value remaining from the supposedly worthless partnership interests he abandoned. However, records show that when the casino bankruptcy was concluded, he got a 5% interest in the stock of the successor company. If his tax credit claimed is disallowed, the Heel will owe the IRS more than $100 million including interest.  Nancy, are you paying attention? 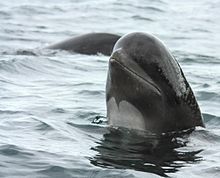 In what is Australia's largest mass stranding on record, three hundred eighty long-finned pilot whales have died on Tasmania's west coast. Whales washed up on sand spits in an area known as Macquarie Heads. Rescuers have managed to save fifty whales. The Tasmanian state government said that rescue attempts will continue as long as their are whales alive on the beach, but the focus of efforts will turn to removing the carcasses scattered along the coast.  Rescuers say about thirty more whales can be saved.  As time ashore goes on, the mammals tire and become overheated.

Science does not understand why whales seem to commit suicide by stranding on shore in large groups. It may have something to do with following the pod regardless of the danger involved.  A pod leader in the hunt for fish could become disoriented, leading a group into dangerously shallow water. Their sonar sense apparently has difficulty defining wide beaches that slope gently to land.  Macquarie Heads is a location of previous mass standings.   Globicephala melas [photo] is prone to stranding.  Strong tides have hampered efforts to return stranding animals to deep water.  Reports from the scene say the multi-ton mamals are quite calm and do not resist human efforts to re-float them.  Pilot whales can grow up to 7m (22 ft) long and weigh up to three tons.

COTW: Why the Filibuster Rule Must Go and More

So Joe has already come out against changing the filibuster rule in the Senate and increasing the number of jurists on the Supreme Court. Pardon me, Joe but both of those items need to be accomplished in a possible Democratically run government. Divided government for over two decades has been a rolling disaster for this country. If the Democrats are lucky enough to pull off a sweep of the White House and Congress, they need to impose their will on a truculent minority that has successfully blocked all progressive legislation since the Affordable Care Act. The key to this blockade has been the Senate filibuster rule. Look at the chart: 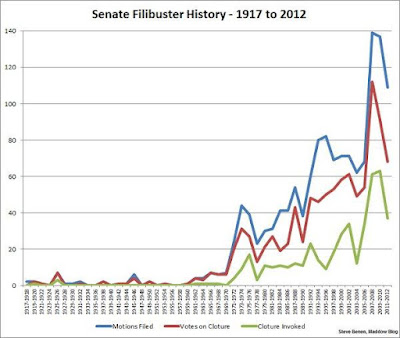 Without doubt the Affordable Care Act, already ruled unconstitutional in the conservative 5th Circuit, and the Supreme Court abortion decision in Roe v. Wade will be atop the target list of a Court tilted hard right for a generation or more, when Senate Repugnants ram through a nomination and confirmation before the end of the year. Because no one was able to convince careerist Ruth Ginsberg to retire while a Democratic president could appoint her successor, Democrats must consider how to counteract a very conservative Court that will be stumbling block to progressive legislation, just as a conservative Court was to FDR's New Deal programs in 1937. Repugnant's are not playing nice guys any longer because they see a demographic sea change arriving that could relegate them to the historical trash bin. Biden's weak appeals to civility and comity are therefore falling on deaf ears.

All the stops are out, so even institutionalists like Senator Chuck Schumer (D-NY) has said everything is on the table. There is progressive support in the Senate for modifying or even eliminating the filibuster. And with a possible lame-duck Supreme Court appointment staring Democrats down, increasing the number of justices to achieve a more politically balanced Court is worth discussing.  It is obvious that the Supreme Court is the least democratic institution in our civilian federal government.  So Congress should not stop with considering more justices, but also imposing a limit on their tenure.  Life-time judicial appointments are a relic of history, not a constitutionally imposed mandate.  See Article III.

Here is something to think about: Repugnant state senators have boycotted the Oregon legislature twice to prevent consideration of a carbon tax bill supported by the Democratic majority.  Unethical behavior, you say?  What about the previous public pledges by US Senators not to confirm a justice during an election year?  Moscow Mitch held up an Obama nomination for eight months, claiming it was too close to an election! Is that ethical behavior?  US Person does not think so.  It is time for Democrats to stand up for the democratic principles this country is supposedly founded upon.

Another Blow Against the Pebble Mine 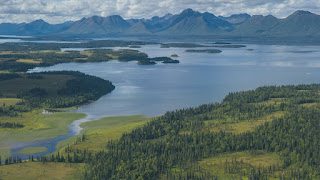 It is the resource extraction project that will not die, the zombie Pebble Open Cast mine at the headwaters of Alaska's Bristol Bay. [photo] The EPA once proposed regulatory restriction that would have killed the gold and copper mine, but thanks to the Antichrist In Office, the EPA dropped the rule changes to settle a lawsuit. The conservationists trying to protect the clean water and salmon runs amounting to a $1.5 billion dollar industry shifted focus to defunding the project. NRDC reports that the global investment bank, Morgan Stanley sold off all of its shares in Northern Dynasty Minerals, the Canadian company behind the mine project. International objections to the mine have convinced four multinational mining companies to abandon the project, leaving Northern Dynasty as the sole backer. The company, which is increasingly short on cash, has intensified its search for new partners and applied for a new government permit.

A major reversal of policy by the regime in August gave new hope to environmentalists that the project is, indeed, dead. In August, the regime decided the proposed project "cannot be permitted" in its current form.  The Army Corps of Engineers devised a series of strict restrictions intended to offset anticipated environmental harms to the sockeye fishery, the world's largest.  Significantly, conservative figures inside the regime and in the recreation industry began to speak against the project; these apparently included 'Mini Me' Trump Jr. who has sport-fished in the area. The mitigation required by the Corps may not be possible because the watershed is considered pristine, and that is how the project would be effectively killed. Nevertheless Northern Dynasty continues to insist that the mitigation requirements are not a "show-stopper".  It will submit a final  management plan that the company says will meet all Corps requirements.

Revelation's "rivers of blood" have not arrived yet, but migratory birds in the 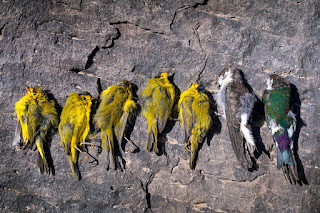 hundreds of thousands are dropping dead out of the sky. [photo credit: K Aigner] Scientists and bird lovers are reporting a mass die-off of birds across the southwestern United States and northern Mexico. Although scientists have yet to assess causation, you do not have to be a rocket scientist or even an ornithologist to suggest that the toxic air from massive wildfires across the Pacific coast is partly responsible. A recent cold weather event in the Rockies could have also claimed birds weakened by their strenuous migration south for the winter. An ornithologist from New Mexico State University who is documenting the mass fatalities estimates that up to a million birds of various species have perished. Death reports started coming in August, but nothing amiss was suspected, Mirgration is difficult and stresses birds to their maximum capacities. Reports continued into September along with disoriented behavior, vagrant birds and atypical flight patterns. Scientists were alerted to a possible catastrophe. NMSU mobilized resources and started investigating. So far, the scientists have collected 300 bird carcasses.

Since the die off started before the cold spell and is continuing after, another causative factor must be involved. Wildfires are known to force early migration, as well as poison the atmosphere and obscure visibility. Jon Hayes of Audubon Southwest says the die-off and wildfires are symptoms of global climate change. “All these things are going to cause long-term declines, long-term losses [of birds], and they’re gonna be punctuated by big scary events like this. It’s part of this bigger problem.” A 2019 study by Cornell University found that North American has lost some 50 billion birds.  The study concluded that 389 bird species, some of which have been killed in the current disaster, are threatened with extinction as weather patterns change and become more extreme due to planetary heating.

Researchers are planning to send some of the bird carcasses they have collected to US Fish & Wildlife's forensic laboratory in Ashland, OR.  The necropsy reports will take a week or more to provide possible answers to the factors causing their deaths. Researchers are asking the public to be on the lookout for dead or disoriented migratory birds and report what they find to state wildlife departments or report on the iNaturalist website.

An indication of just how fixated on minutia the Swamp political culture is while the world descends into ecological chaos: 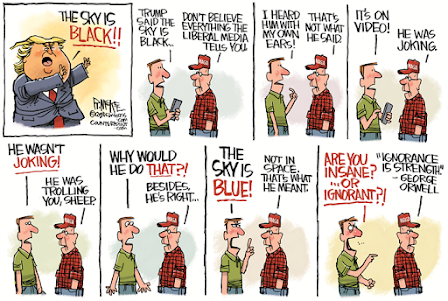 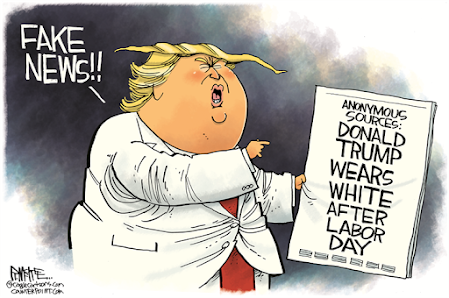 Wackydoodle axes: Yes, but does he wear underwear?