COTW: Your Future Beneath the Sea

In a stunning series of maps, cartographer Jeffery Linn shows us what some cities could look like if all the world's ice sheets melted--something is that nor just science fantasy: it is a sobering glimpse into a radical possibility. What was once Portland, Oregon is a peninsula jutting out into shallow seas-- the Sea of Tualatin and Willamette Sea--full of islands named for dry locals: 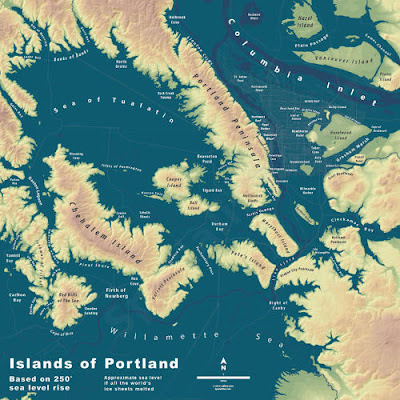 The Intergovernmental Panel on Climate Change predicts a sea level rise of between 1.7 and 3.2 feet. Some scientists predict 10 feet by 2300. So these maps depict an extreme scenario. Nevertheless, it is sobering to think what even a 2 foot rise could do to coastal cities around the world.  Below what was once the dry-land megalopolis of Los Angeles is completely submerged below the waters of the "Bay of LA" and the "Sea of Orange County".  Knots Berry Farm is now "Knots Oyster Farm".  LAX becomes "Ex-LAX".  Hilarious, if not scary. 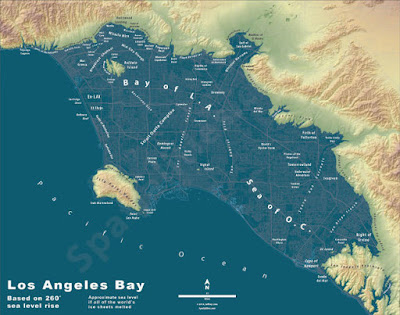