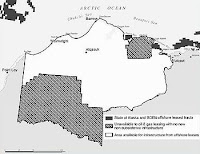 A farewell gift to the oil industry* from departing Interior Secretary Ken Salazar is his decision to open up three-quarters of the recoverable oil in the National Petroleum Reserve on Alaska's Chukchi and Beaufort Sea coast to production. He signed the Record of Decision on Thursday. Secretary Salazar made an effort to protect the abundant wildlife living in the 23 million acre Reserve saying the "balanced approach under this plan is the result of extensive local input and will help guide production and transport" of the estimated 9.3 billion barrels of oil that are economically recoverable. Only 11 million acres of the Reserve is designated protected for wildlife, while almost all the coastline is opened to energy development. The Audubon Society opposed energy exploration of Lake Teshekpuk in 2006 under the Charlatan's "drill, baby, drill" government, but expressed approval of Secretary Salazar's final decision since it was based on a preferred alternative development plan supported by the organization. The critical Teshekpuk Lake Area [map, upper right] and Utukok River Uplands [lower left] were both preserved from oil and gas development under the decision. Teshekpuk Lake [video]at the center of the Arctic's largest wetland is a prolific waterfowl and migratory bird nursery. Large populations of geese from Canada, Siberia and other parts of Alaska travel to the wetlands for their annual molt before heading south. They are unable to fly during this time and are particularly vulnerable to disturbance. NPR-A also is home to Alaska's largest caribou herd comprised of about 325,000 individuals. Some forty native villages rely on the Western Arctic caribou herd for sustenance.

A lease sale of NRP-A blocks was conducted last December generating 17 winning bids covering 140,000 acres. Another lease sale will be conducted in November. Conoco-Phillips got production permits for the Reserve issued to it last year.

*for statistical evidence that lobbying works, i.e. a positive correlation exists between lobbying expense and corporate performance, see the study by Chen, Parsley & Yang (2010).
Posted by US PERSON at 10:03 AM