credit: Tom Toles, Washington Post
Wackydoodle sez: And yer gas mask!
The Obombanator will inevitably be called the 'Lone Ranger' for his willingness to unilaterally attack another sovereign nation in the Middle East. His justification however, unlike his predecessor in office, is on firmer humanitarian grounds. One small problem: unlike the British, neither the United States nor NATO have recognized humanitarian emergency as a basis for military action against a sovereign nation. The administration said it would consult Congress before ordering an attack.

Legal quibbles aside, weapons of mass destruction do undeniably exist in Syria in the form of Assad's chemical weapons arsenal. The international consensus is that nerve gas was released in the eastern Ghouta suburb at the time of a Syrian government offensive resulting in mass casualties. How it was released, or who released it, and for what reasons, is still not perfectly clear. For now the US government appears willing to wait the results of the UN chemical experts sent in to collect samples. Britian's decision after open debate in Parliament not to saddle up with its usual partner and attack Syria will probably make little difference to what some pundits see as an inevitable US punitive action against Assad's regime. The Obombanator wants action before he has to enter the arena with Mr. Putin at the St. Petersburg G-20 summit in one week. France is ready to engage force with the United States and President Hollande is candid about France's desire to oust Assad from control of its former mandate. Israelis are rumbling for gas masks now. The Obombanator will want to brush up on his French: "Est-que vous participez avec nous?" 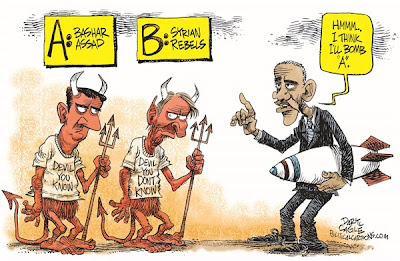 credit: Daryl Cagle, Cagle.com
Posted by US PERSON at 11:14 AM