WANTED: Leaders of the Regime 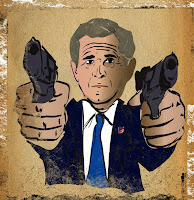 Update:  The Daily Beast reports that Spanish officials have informed the Obama Administration of their intention to proceed with the indictment of six members of the Regime including former Attorney General Alberto 'Gonzo' Gonzales for their role in developing and implementing a US torture policy as an integral part of their "global war on terror". Spanish officials including chief prosecutor Javier Zaragoza have met with US State Department representatives to inform them privately of the legal proceeding.  A formal announcement is expected today.  Prosecutors will ask Judge Baltazar Garzon to reassign the torture case since he also presides over the case bringing terrorist charges against five Spaniards previously detained at Guantanamo.  Spain is asserting universal jurisdiction under the UN convention against torture based on the alleged torture of these same Spanish nationals.  When Spanish prosecutors asked the State officials if the United States had any intention of launching an investigation of the Torture Six, they received no reply.
{posted 3/29/09} Spain has initiated legal proceedings against six former officials of the 'Bushed' Regime. Subpoenas may issue within the next two weeks demanding the accused respond to charges of torturing detainees in violation of the 1984 UN Convention Against Torture.  Baltasar Garzon, who led the prosecution of General Augusto Pinochet former President of Chile, has referred the case to Spain's chief prosecutor before proceeding.  According to Gonzalo Boye one of the four lawyers who wrote the brief there is little choice but to approve the prosecution despite the damage it will do to US-Spain government relations.  Spain was once part of the "coalition of the willing" until public outrage at the 2004 bombing of a Madrid train station by muslim terrorists forced a change of government and withdrawal of Spanish troops from Iraq.  Only a similar prosecution in the United States would prevent Spain from exercising jurisdiction.
According to the Guardian's Observer the lower level officials named in the case are Alberto Gonzales, former Attorney General, Douglas Feith former Undersecretary of Defense who headed the Pentagon office that forwarded selected raw intelligence justifying an invasion to the Vice President, David Addington, former chief of staff to the Vice President, William

Haynes, formerly Pentagon general counsel, John Yoo and Jay Bybee, former Department of Justice lawyers who authored the legal opinions allowing torture.  All are members of what they called "the war council" which "met almost weekly either in Gonzales' or Haynes' offices" alleges court documents. A November 2002 memo written by Haynes recommends Defense Secretary Rumsfeld give blanket approval to fifteen forms of "enhanced interrogation" techniques.  Rumsfeld approved the use of torture. His handwritten note ordering policy compliance was posted outside the interrogators' office at Abu Ghraib.  If Spain pursues the case aggressively it could result in the United States having to consider a highly embarrassing extradition request from a major western ally and member of the European Union. Administration officials have admitted they think torture was committed by the Regime.  The Senate Armed Services Committee found last year that torture of captives was a Regime policy not an aberration perpetrated by 'a few bad apples' acting on their own as portrayed to Congress by Donald Rumsfeld.  But if the President decides not to initiate US criminal proceedings for purely partisan reasons, then other authorities with international jurisdiction will undoubtedly decide to push ahead with prosecutions.  The Torture Convention, ratified by the US, requires signatory states to investigate allegations of torture committed by their nationals or extradite them for prosecution elsewhere.
[image: courtesy of www.withextravinyl.com]
[lower photo: courtesy Alexander Cockburn]
Posted by US PERSON at 10:00 AM