The northeast has been battered by two powerful winter storms with a third one on its way, expected Wednesday.  Maryland, Virginia, New York and Massachusetts declared states of emergency as they were inundated by record high tides and hurricane force winds.  Boston experienced its third highest high tide on record since record keeping began in 1928.  The record of 15.16 was set just two months ago, on January 4th.  Conservationists say the "strong" weather is a stark of example of whats to come in an age catastrophic climate change.  There is some $6 billion worth of construction in Boston's Seaport District; lately its been known as the 'inundation' district and few of the projects are equipped to handle repeated flooding.  Boston planners say sea level has risen 9 inches in the last century and could rise 1.5 feet in the first half of this century.

The massive Naval Station at Norfolk, Virginia not only floods during severe storms, but even on sunny days if the tides and wind are right.  US Army Engineers identified the tipping point of 1.5 feet of sea level rise which would cause serious infrastructure damage in a 2014 study.  So far there are no plans to address the condition which scientists expect within a few decades.  When the station was established 100 years ago, sea level was 1.5 feet lower than it is now.  To compound flooding problems, the land is flat, near sea level, and compressing since much of the base was built on landfill.  The Union of Concerned Scientists said its own study that a sea level rise of 1.4 feet would cause the base flood. 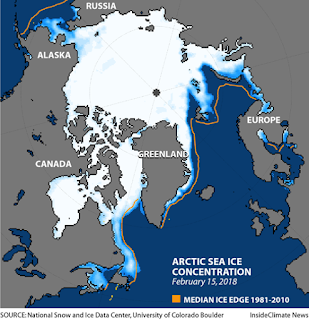 Alaska's Bering Sea lost a third of its ice cover in just eight days in mid-
February, at a time when ice cover should be reaching its greatest extent for the year.   Instead it is shrinking; now 60% below its average of 1981-2010. [map]  The Arctic's cool temperatures act as a global climate moderator, but that role is coming to an end as the Arctic's last two years were the warmest on record. Arctic sea ice has been declining this century at rates not seen for the last 1500 years. The low ice level is impacting subsistence hunters along the Alaska coast.  In a positive development, a federal appeals court ruled last month that the ringed seal, which is rapidly loosing its habitat, qualifies for protection under the Endangered Species Act.  Now, the federal government must identify critical habitat for the seal, which impede exploitation plans by oil companies and their governments.
Posted by US PERSON at 3:55 PM