Calling Saudi Arabia a "spectacular ally" on the day the enemy of the people--the press--reports the CIA has concluded the Crown Prince Muhammad bin Salman ordered the murder of a journalist does not do much for Mr. Yuge's already shredded credibility.  The CIA has told Trump that it has high confidence in the accuracy of its conclusion based on multiple intelligence resources, including an intercepted telephone call from the Prince's brother, Khalid bin Salman telling journalist Jamal Khashoggi it was safe for him to go to the Kingdom's consulate in Istanbul to pick up documents he needed for his marriage.

Khashoggi was murder with an overdose of sedative by a hit squad in the consulate. Then his body was dismembered and removed from the premises. Turkish officials had placed a listening device in the consulate, and turned over the recording of Khashoggi's murder to western ntelligence.  The CIA's conclusion is unlikely to alter Salman's accession to the throne in an authoritarian monarchy where he already controls down to the minutest details, according to the intelligence agency. One suggested motive for the assassination is that Prince Salman considered Khashoggi a security risk because of his close ties to the Muslim Brotherhood.  Saudi Arabia has announced it will seek the death penalty for those convicted in the murder, but as one US official said, that event "could happen overnight or take twenty years". According to the Kingdom's public prosecutor office, eleven people have been charged with involvement in the murder. 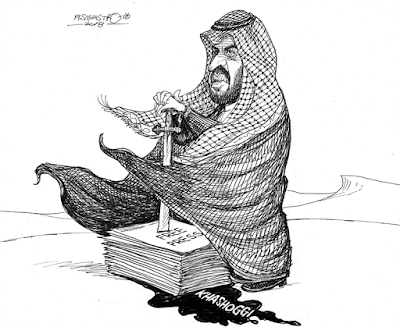 
Meanwhile, when Mr Yuge is not praising brutal fuedal monarchs, he is berating the Russian Connection investigation, writing that Robert Mueller's staff, "has gone absolutely nuts", adding they "are a disgrace to the nation".  Mr. Yuge has recently been sequestered with his lawyers as they answer some 140-odd questions submitted to him by the Special Counsel's office.   Mr. Yuge's move to replace Jeff Sessions with a loyalist is already drawing bi-partisan criticism and a lawsuit from the state of Maryland.
Posted by US PERSON at 6:10 PM