The longer the Russian Connection investigation continues, the more Hair Further resembles 'Tricky' Dick Nixon.  Nixon, readers may recall, fired Special Prosecutor Archibald Cox [photo] who was investigating the Watergate break-in by former FBI and CIA agents hired by the White House.  Hair Further has gone one better and fired his Attorney General, Jeff Sessions, who recused himself from overseeing Robert Mueller's activities on Wednesday.  In his place he has inserted a loyalist minion, Mathew Whitaker, who now has authority to control the scope of Mueller's investigation, prohibit the publication of Mueller's investigative report, or even fire him.   Democrats warn that Whitaker will try to slowly “strangle” the Russian Connection investigation by cutting its funding or limiting it in other ways. “It is, in effect, a slow-motion Saturday Night Massacre,” Senator Richard Blumenthal, of Connecticut, a member of the Judiciary Committee, referring to Cox's termination. “The reason that they are doing this in a slow-motion way is to avoid that uproar and uprising.”  Democrats have objected to Whitaker's appointment on ethical grounds, citing potential conflicts of interest.  Whitaker was the campaign chairman for an investigation witness who unsuccessfully ran for office in Iowa.  The decision to fire Sessions will certainly add impetusl to the effort to impeach Mr. Yuge in the House of Representatives, now controlled by Democrats.  The new Congress begins in January.

The announcement of Session's firing came during a chaotic press conference in which the would-be dictator publicly chastised a reporter from CNN for exercising his First Amendment rights.  Jim Acosta refused to release the microphone to a female White House aide while asking the man follow-up questions.  Hair Further called him a "rude", "terrible person" and suggested he should be fired for touching the female aide.   After the conference, the White House yanked Acosta's press credentials, drawing protests from across the Fifth Estate.  Histrionics aside, Mr. Yuge should remember his history:  firing Cox did not work out well for Nixon.  The firing intensified efforts in Congress to widen and continue the investigation of the President's high crimes and misdemeanors, headed by Cox's replacement, Leon Jarowski.  Nixon was eventually forced to resign in disgrace after the House voted for a bill of impeachment. 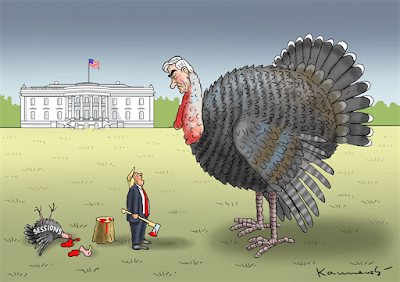